(All vintage, all original. No reprints, no copies) 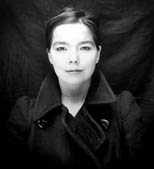 This beautiful portrait was photographed in Matthew's flat in Islington. Bjork viewed Matthew as a uniquely talented photographer. 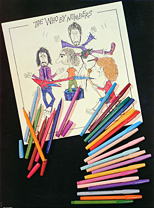 John Entwistle: "We were taking it in turns to do the covers. It was Pete's turn before me and we did the Quadrophenia cover, which cost about the same as a small house back then, about 16,000 pounds. My cover cost 32 pounds." 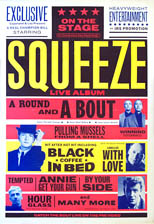 As well as being one of Punk's great originals in their own right, Pete Shelley and Howard Devoto were responsible for organising the Sex Pistols gig at Manchester's Free Trade Hall in June 1976, which lit the touch paper for the city's remarkable creative musical explosion. 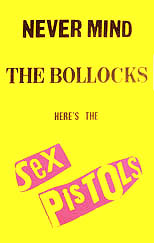 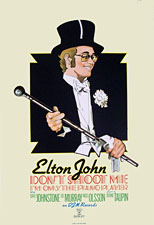 The album was released in early 1973, but this poster is dated 1972 and may conceivably feature the originally intended cover art.
Vintage Elton John posters from the classic early albums are scarce. 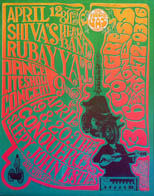 The Vulcan Gas Company (1967 - 1970) was Austin Texas's legendary underground venue, with some of the best psychedelic concert posters of the 60s. Produced in small quantities with no reprintings (unlike their San Francisco counterparts) this poster is rare. Gilbert Shelton went on to draw the Fabulous Fury Freak Brothers comix. Distinctive artwork for an incongruous bill typical of the period. 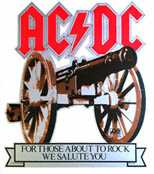 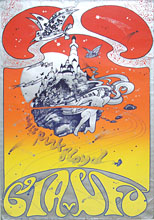 Commissioned by International Times to design posters for their underground UFO club on London's Tottenham Court Road, Michael English and Nigel Waymouth were true creative originals, on a par with San Francisco's famous Family Dog collective. Pink Floyd's UFO performances before a sympathetic audience helped cement an increasing popularity. A week later, their first album 'Piper At The Gates of Dawn' was released.
Vintage originals of this poster are very scarce. Beware fakes.

The magnum opus of Malcolm McLaren's reinvention of the band's history (in his favour) that began almost the moment it ceased to exist. It took 20 years for 'The Filth And The Fury' to set the record straight. A proposed Jamie Reid design was ditched in favour of the final (apt) 'Carry On..'-style artwork.

The album 'Yessongs' was released on three discs in a unique fold-out package featuring four narrative artwork panels by Roger Dean, continuing the theme that began with 'Fragile' in 1971. "Escape", showing the craft leading the planetary fragment through space, is the first panel.

Antony Price and Bryan Ferry enjoyed a long working relationship through the Roxy years and beyond, the designer's stylish retro-futurist aesthetic chiming perfectly with Ferry's own. 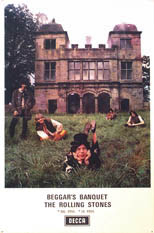 Rare promo for the landmark album (the key to their classic period), the first produced by Jimmy Miller and the last to involve Brian Jones, that saw The Stones' return to the Blues.
The building is Swarkestone Hall Pavilion, a 17th century grandstand, part of the original grounds of Swarkestone Hall in Derbyshire. 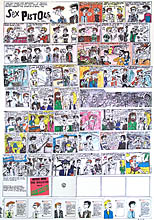 The cartoon poster was made for Warner Brothers for the original U.S. release of the album, It was used for in-store display and also for press/promotion. Sid is nicely described as "the most versatile musician of the four". 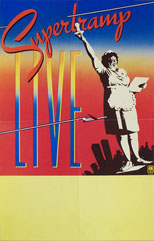 Gorgeous small concert poster, featuring the saturated colour graphic version of the cover design which was used only on special promotional material. 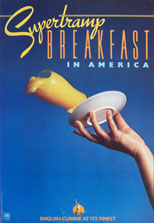 Scarce poster for the title single. 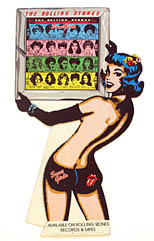 Re-energised by the challenge of Punk and the Disco and Latin flavours of New York City, Jagger led the band to cut their best album since 'Exile..' and their last great album of properly new recordings.

After two unsuccessful American albums Ron and Russell Mael relocated to Britain in 1973 and signed with Island Records.
'Kimono My House', rated by many fans as their best LP, was Sparks' breakthrough release, with 'This Town Ain't Big Enough for Both of Us' reaching no.2. Truly unique, Sparks were to prove very influential. 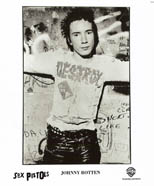 Classic Lydon image, resplendent in Seditionairies shirt, on location at the video shoot for 'God Save The Queen' at The Marquee Club. This and the following two photos were most likely issued for Warners' 1988 re-release of 'Never Mind The Bollocks'. 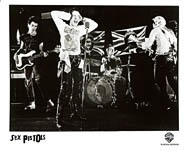 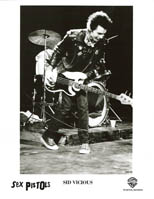 Sid getting in a tangle. 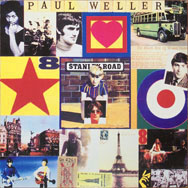 Very attractive original in-store promo standee (the upright on the back is missing) on thick card stock.
Scarce. 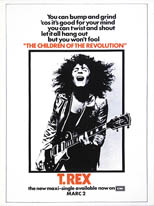 Scarce poster for one of the classic T. Rex line up's last major hits. It reached number 2 in September 1972.

© Rock Explosion and Movie Poster Art Gallery. Reproduction of and links to text and images for commercial and/or private selling purposes strictly forbidden.

BACK TO HOME PAGE

BACK TO PAGE TOP